What an auspicious day.

I know that much of the content below will be met with skepticism, but I’ve described it anyway for posterity and for anyone interested.

Lisa specializes in many traditional herbal and Chinese medicine treatments, including acupuncture, herbal formulas, cupping, moxibustion, tui na, and Qi Gong. Tina and I feel that Lisa has worthwhile treatments that will benefit me.

She expressed that we picked a fantastic day to begin our treatment with her. Today is the Fall Equinox. I don’t know much about what that implies, but something about new beginnings and an ideal time to plant intentions.

Lisa wants to use the tumor’s energy from the slide we got from Emory during my treatment. She will also “introduce” my body to the chemo medication. We will inform my body of what’s happening. We’ll acknowledge that the medicine is harmful, but explain that it has an important purpose — to seek out and kill bad cancer cells. Don’t fight it. Let the medicine do it’s job and focus on keeping the rest of the body strong and healthy. Of course we’re not actually talking to my body, but rather using intention and actions.

I mentioned to Lisa that there is the chance that I could receive placebo in the trial rather than the actual vaccine. She replied that this is not necessarily important — that the placebo effect is beneficial. The power of the mind to heal the body is incredible. The fact that I think I am getting something that will heal me, is arguably as good as actually getting the real thing… especially in this case, where the vaccine isn’t proven to be helpful.

Next, Lisa used an Acutron Mentor machine to test the energy levels of my chakras. My crude explanation of the primary chakras in our bodies is that they are seven energy points located from the base of the spine up to the head. One of the things this machine does is measure how well electric current moves from the front of the body to the back, through the chakras. Let’s just say that my chakras weren’t as open as they could be.

Lisa had me lie down and firmly hold the thumb and middle finger of my right hand together. She would lightly touch a spot on my body and then attempt to pull my fingers apart. Sometimes they held fast. Sometimes they came apart. Here’s the really interesting thing: Let’s say she touched my right temple, then easily pulled my fingers apart. She would then swipe her finger up in the same spot. Now my fingers held fast. And then she would swipe her finger down in the same spot and my fingers would again come apart easily. That was bizarre. 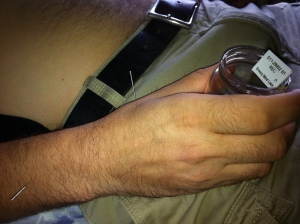 The information gathering described above allowed Lisa to decide how to treat me with needles. She had me hold in my right hand a jar containing the tumor slide and a vial of something that she did not tell us what it was and we did not ask. She put about 20 needles in me from head to toe, which didn’t hurt at all, and asked if I felt any energy movement. I didn’t feel a thing (and didn’t expect that I would). She dimmed the lights, put on some new age music and left the room for twenty minutes. Well it wasn’t too long before a felt something at one of the needle points in my right leg. It was a vibration that lasted about a half a second and repeated every second. It felt circular, like the needle was spinning although I didn’t look to see. Then I noticed a couple other sensations, one in my other leg, one at the crown of my head. Who knows, maybe we unblocked some energy channels.

When Lisa removed the needles and took the jar with the tumor in it from my hand. She felt my hand and pointed out how hot and sweaty it was. Her explanation was that it was my hand’s reaction to the toxic energy of the tumor.

That about sums up the visit. Sunday we are going to a restorative yoga class and then getting a private lesson in meditation from a good friend. I’ve got a fresh batch of wheat grass sprouted and ready to plant. Another good friend is delivering a kombucha scoby to me and I’m picking fresh shikate mushrooms off a log in my yard. I think we’ve got a good start on some alternative therapies.