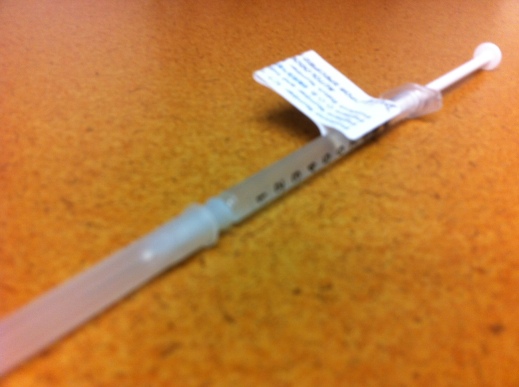 On Tuesday, November 8, I received my first injection of either my custom-made vaccine or placebo for the ICT-107 clinical trial. Several hours after the shots, I experienced flu-like symptoms, which went away after a good night’s sleep. So far, so good. That is the crux of this update. Gratuitous details below.

My scheduled appointment was for 9:00 am. As the nurse approached, the look on her face told us something was wrong. The lab did not ship my vaccine. We would have to stay in Chicago an extra day to wait for it. The repercussions of this include extra expenses, Tina’s job responsibilities, rescheduling other commitments… not an acceptable scenario.

Tina took the bull by the horns and set in motion a plan to have the vaccine delivery expedited so that it would arrive (from Philadelphia) that day with time for us to make a flight back to Atlanta that evening. Because the lab made the mistake, all our expenses would be paid by the trial sponsor. Unfortunately, the only seats available for the flight home were in first class. What can you do?

The flight from Chicago to Atlanta was delayed about two hours. This was just enough time for symptoms of the vaccine to hit me as we boarded the plane. The four blankets I was buried under did little to quell my chills. I had to pass up the perks of first class, but at least I had room to toss and turn.

We are choosing to view these symptoms as a sign that I got the real vaccine as opposed to placebo. I expect the lab might design the placebo to have similar effects though.

4 responses to “Injected, Hopefully with Vaccine”